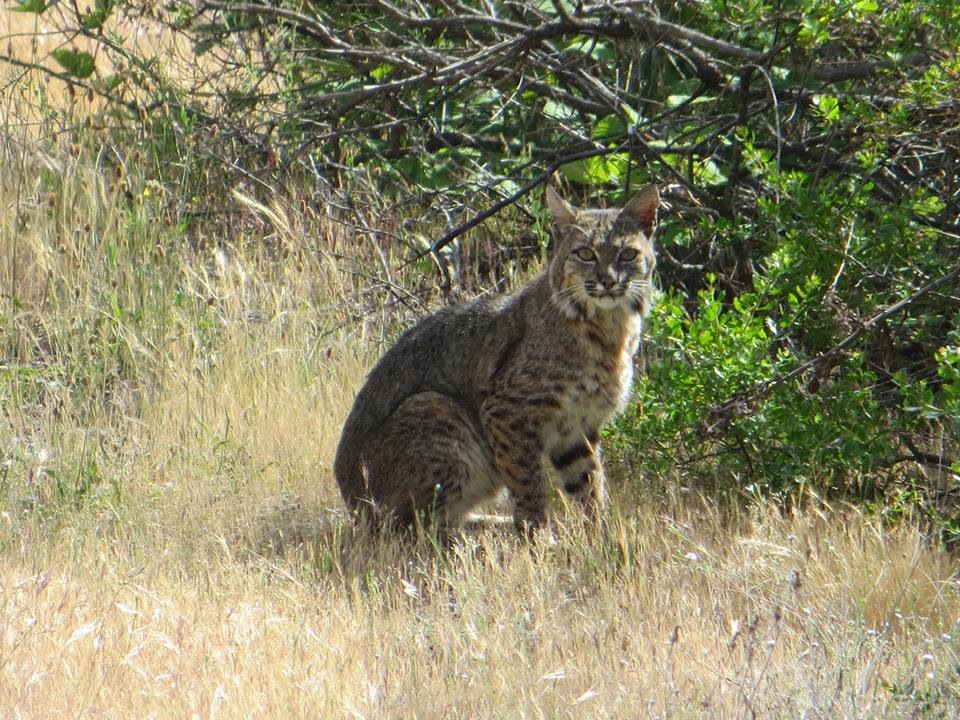 Humboldt Redwoods State Park encompasses a wide variety of habitats, making it home to a myriad of mammals, fish, reptiles, and birds. Some animals are seen more frequently than others, but the park often provides plenty of wildlife viewing opportunities.

Several animals are commonly seen in most areas of the park. Black-tailed deer, California ground squirrels, gray fox, and raccoons can be seen throughout Humboldt Redwoods. Black-tailed deer, or mule deer, are the most frequently seen large mammals in the park. Deer are often seen munching on vegetation or sometimes bounding across a meadow or up a hillside. Their diet consists of leaves, twigs, and some berries. On the other end of the scale, one of the smallest mammals commonly seen in the park is the California ground squirrel. These small rodents can be spotted scurrying around the campgrounds and searching for unattended food from campers; although their natural diet consists of grasses, seeds, and nuts. Unlike tree squirrels, ground squirrels live in burrows. They may sometimes be seen running up a tree, but ultimately they will retreat to a burrow for safety, sleeping, or other activities. Gray fox and raccoons are also common creatures in the park, but they are primarily nocturnal. The gray fox preys on rabbits, rodents, and birds, but they will also eat fruit and berries. Raccoons are excellent swimmers, and they eat a wide variety of foods, including frogs, insects, fruits, and nuts. However, raccoons are also opportunistic when it comes to food, and they will get into trash containers or other unattended food when the opportunity presents itself. Both the gray fox and the raccoon are common sights throughout the park, including in the campgrounds after dark.

One of the largest and most talked about mammals in the park is the black bear. Black bears have shaggy black fur, short legs, and may weigh up to several hundred pounds. However, some black bears have cinnamon or brown colored fur rather than black. They are excellent swimmers and climbers, and they can even run up to 30 mph! Bears are usually out at night, but they are often seen during the day. They are intelligent animals and possess a great deal of curiosity. The natural diet of a black bear consists of grasses, tree bark, fruit, berries, insects, fish, and small mammals. Like raccoons, black bears are also opportunistic when it comes to food. They will eat food at camp sites when given the chance, and they sometimes become aggressive, destructive, or dependent on human food as a result. All food and scented items must be secured when visiting the park for the safety of park visitors and its native residents–the wildlife. Proper storage means securing these items in your vehicle or in a bear box while in the campgrounds or the backcountry. Black bears are typically shy of humans and will often run at the sight of people. However, they are wild animals and should be considered potentially dangerous. Never get between a bear and its cub! If you encounter a bear, stand your ground, wave your arms, and make lots of noise.

Most likely the closest you’ll get to the other well-known large mammal in the park, the mountain lion, is by seeing its tracks. Mountain lion tracks are round with four toe prints that show no claws. These large cats are often shy of humans and would rather avoid contact when possible. However, they are wild animals and are potentially dangerous. If you do encounter a mountain lion, do not approach it. Instead, be sure it has a way to escape, and do not run from it. Stand your ground, make yourself look as large as possible, and fight back. Mountain lions are solitary creatures except during mating or when a mother has cubs. They are territorial, and can have a range over 100 square miles. Mountain lions prefer deer as their primary prey, but they will also eat pigs, raccoons, and squirrels.  Bobcats (pictured at top of page), are the other feline species living within the park. Like mountain lions, they are solitary and are rarely seen.

The South Fork and main stem of the Eel River winds its way through the park and provides a habitat for water loving creatures. The river was named after the Pacific Lamprey which was mistakenly thought to be an eel. Lampreys have eel shaped bodies and are parasitic, but they do not cause permanent damage to their host. Their mouths form a suction cup shape and are lined with teeth. Just like salmon and steelhead, lampreys are anadromous, meaning they live part of their life in the ocean but return to fresh water to spawn.

Steelhead, Chinook salmon, Coho Salmon, and Sacramento pikeminnow are found in the rivers and streams at Humboldt Redwoods State Park. Steelhead, Chinook, and Coho are anadromous fish. They are born in fresh water and spend anywhere from a few months to several years of their life there. They will then travel to the ocean to grow and gain strength for 1-4 years. Finally, they return to freshwater to spawn. Steelhead are the anadromous form of rainbow trout. Unlike Chinook and Coho, Steelhead do not die after spawning and usually spawn more than once in their lifetime. Chinook and Coho salmon have similar exterior appearances. There are some differences in color and shape on the two fish, but the primary distinguishing characteristic is size. Chinook are the largest salmon and are sometimes called king salmon. Adults may weigh over 40 pounds, while the average weight of an adult Coho is only 8 pounds. Salmon populations have greatly diminished in recent years, and Coho salmon are listed as threatened on the Federal Endangered Species list. There are many factors relating to the salmon population decline. One of those factors is the Sacramento pikeminnow. This fish is not native to the Eel River, and it is believe they may have been introduced several decades ago by a fisherman who emptied a live bait bucket into a connected waterway. Pikeminnow prey on salmon and steelhead as well as other pikeminnow. In addition to the pikeminnow, human activities such as logging and the implementation of dams have caused changes in the rivers and streams which has contributed to the struggling salmon population. Fishing was once a thriving industry along the Eel River, but its popularity and success has declined with the small number of salmon. Winter is the prime time for fishing the Eel River, and many people still enjoy this activity. Fishing is allowed on the Eel River and is catch-and-release only. There is no fishing in any other waterway in the park.

In addition to fish, there are many other animals that can be found in or near the water. River otters are occasionally seen frolicking in the Eel River or along the bank. These weasel-like animals are active year ’round and swim quickly. They have dark brown dense fur, short legs, and webbed feet. River otters typically eat fish, frogs, and turtles. The western pond turtle also eats fish and frogs, and you may see one basking in the sun on a log in the river. 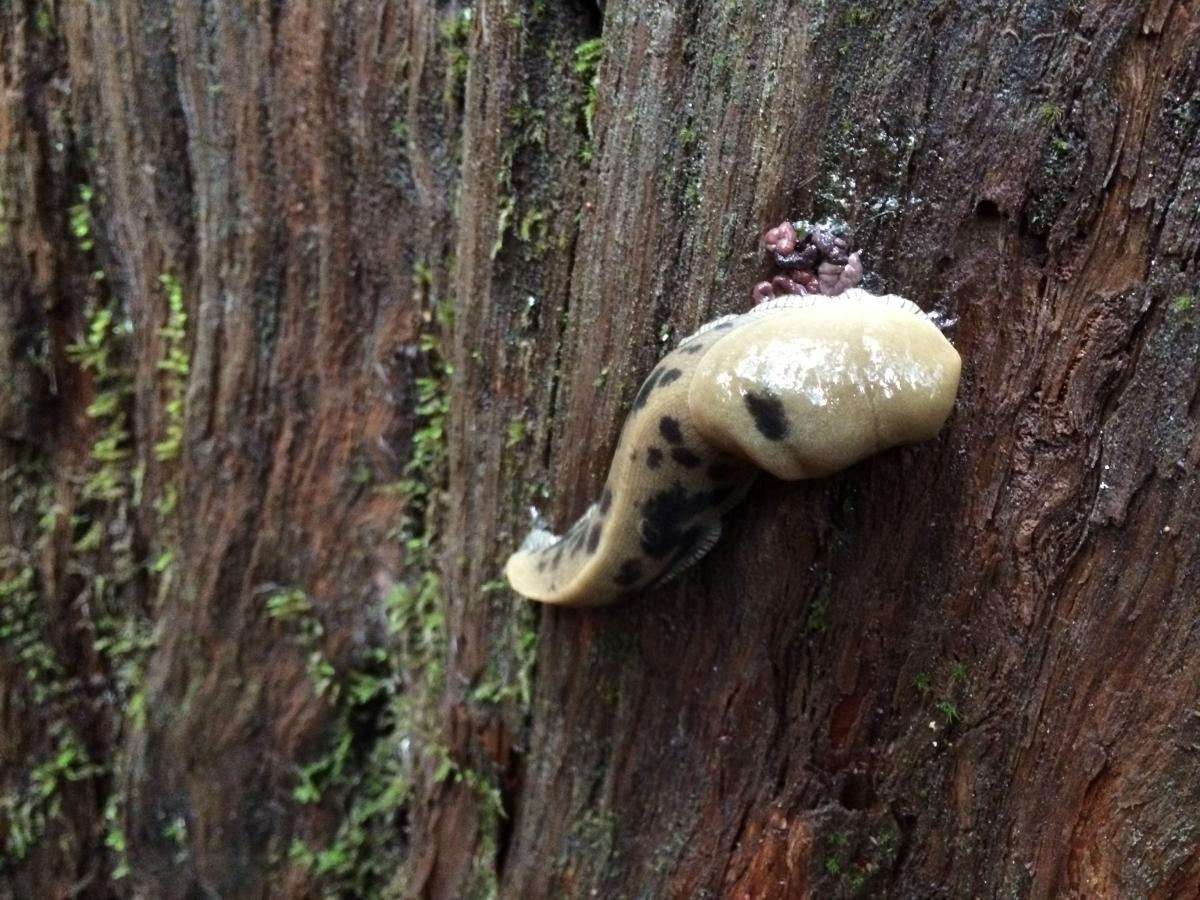 One of the most interesting creatures in the coast redwood ecosystem is the banana slug. They are mollusks and can be yellow, brown, or a combination of yellow and brown splotches. Banana slugs operate as a virtual vacuum for the forest floor, eating everything from vegetation to fungi. They are prey for salamanders, newts, snakes, foxes, and raccoons.

Humboldt Redwoods State Park is also home to many species of birds. Ravens, robins, and wild turkey are quite common and are frequently seen throughout the park. In many areas, and especially in the campgrounds and day use areas, Steller’s Jays are seen regularly. Their natural diet consists of seeds, berries, acorns, and bird eggs. However, they will become accustomed to human food from frequenting campgrounds and picnic areas. The park is also home to several predatory birds, such as the red-tailed hawk, osprey, and bald eagle. Red-tailed hawks are the most common hawk in North America, and are usually easy to identify by their broad, red tail. Ospreys are occasionally seen, and their nests can be spotted on top of snags near the river in various parts of the park. Their diet consists almost exclusively of fish, and they are one of the largest birds of prey in North America. Another large raptor, the bald eagle, is not commonly seen in the park, but it is unmistakable with its brown body and white head.

With tens of thousands of acres and a variety of habitats, Humboldt Redwoods State Park is home to a plentiful wildlife population. While not all of the forest’s living creatures are readily visible to the casual visitor, a diverse and thriving ecosystem exists.