Humboldt Redwoods State Park contains more than 200 plant species. In fact, the amount of biological material in the park amounts to a biomass that is 8 times that of the Amazon rainforest! The redwood forest is home to several plant communities where environmental factors shape the landscape. From the first glimpse of a towering coast redwood to a tiny pink flower on the forest floor, the park is filled with a variety of amazing plant life. 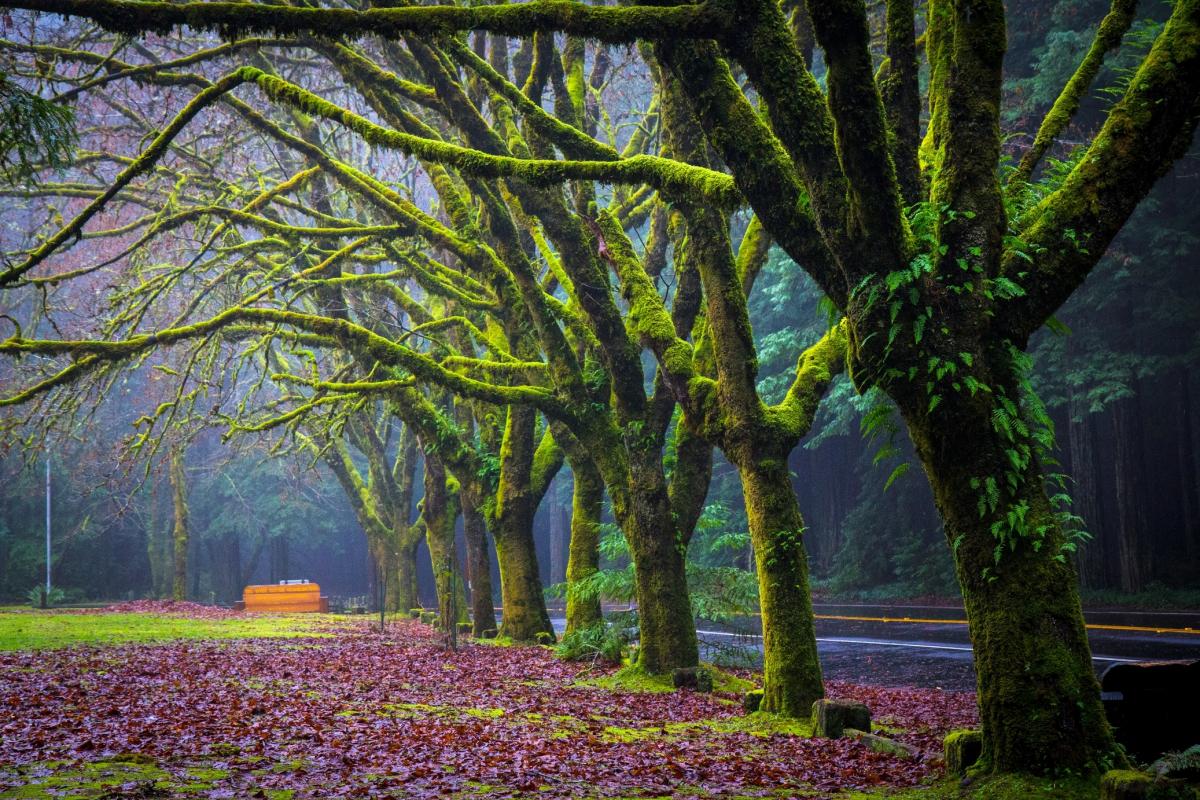 Besides the coast redwood, other common trees in the redwood forest are Douglas Fir, Tan Oak, Big-Leaf Maple, Pepperwood, and Madrone. Douglas Fir and Tan Oak trees are quite common and are found throughout the park. They can tolerate a variety of conditions, so these trees grow in the moist areas amongst the redwoods as well as the drier slopes where mixed forests are common. Douglas Fir trees are the second largest trees in the coast redwood forest and they are sometimes confused with redwoods. Tan Oaks are also common throughout the park; they are not true oaks, but they do produce acorns. Tan Oak acorns have bristly caps, which help set them apart from true oaks. Both Big-Leaf Maple and Pepperwood trees are found in redwood groves as well as upland slopes. Conditions are drier in upland slope areas, and these are places where mixed forests are often seen.

The Eel River, Bull Creek, and many other creeks wind their way through the park creating numerous streamside habitats for moisture loving plants. These locations are ideal for Black Cottonwoods, Willow, and horsetail– to name a few.

Exploring one of the park’s many trails or wandering into the woods from a roadside turnout will allow a glimpse at some of the less obvious plants found in the redwood forest. The forest floor contains many ferns as well as small flowering plants. The most common fern is the Western Sword Fern, but the Bracken Fern is also frequently seen. Sword Ferns are typically found in shady areas of the forest, but they can also be seen in the drier mixed forest settings. Bracken Ferns are more tolerant of different habitats and can grow under the shade of the redwoods or in the sunny, drier areas. Five-Finger Fern, Goldenback Fern, and Lady Fern are also found in many places in the park. In addition to the lush greenery offered by the ferns, many flowering plants add color to the forest floor during the spring and summer months. Redwood Sorrel has a clover-like appearance, and it commonly covers the ground creating a virtual emerald carpet.  It blooms in the spring and summer with pink flowers. Trillium and Milkmaids are some of the earliest flowers to bloom in the spring. Trilliums, also known as Western Wake Robins, have three large green leaves with a white flower blooming above the leaves. The flowers have three petals and they turn a lavender color as the flower ages. Milkmaids typically grow in the cool, shady areas of the redwood forest. They have small, four-part white to lavender colored flowers and are often seen along the roadway. Redwood Violet, Siberian Candyflower, and Douglas Iris are other common flowers. Some of the more rare species include the Redwood Lily and Calypso Orchid. Redwood Lily blooms are white with purple spots and turn a deep purple as they age. The Calypso Orchid is also somewhat rare. The orchid is pink with a lower petal that is lip-like and spotted pink and white. It grows in the moist 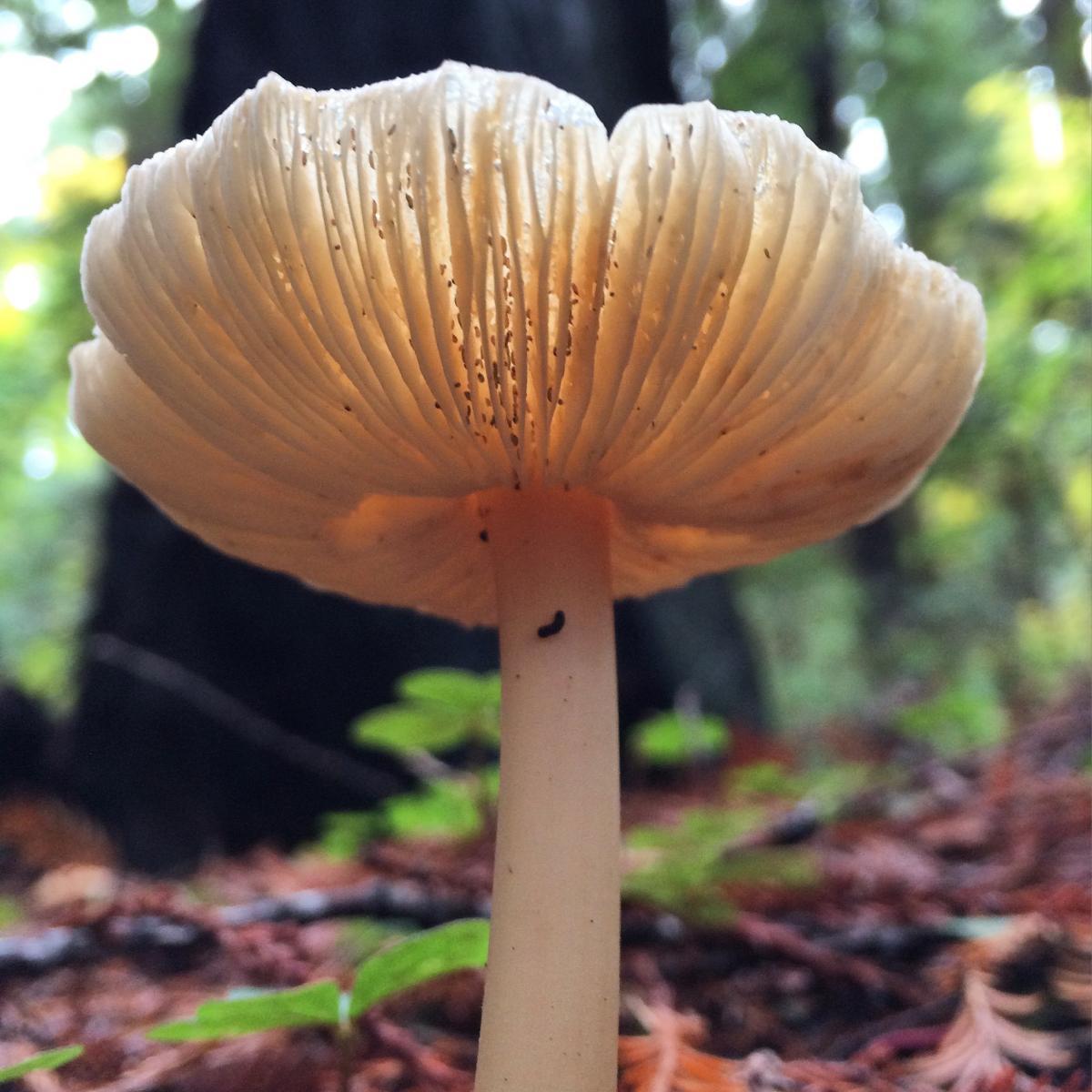 woods and was named for the Greek goddess Calypso. Throughout the spring and summer, Humboldt Redwoods State Park comes alive with new growth and color from the many flowering plants.

In this moist coastal climate, a wide variety of lichens, fungi, and mosses are found throughout the park. Many types of mushrooms and other fungi are visible during the late fall and winter months when it is cool and wet. Currently, 93 different lichens and 320 fungi have been identified in Humboldt Redwoods State Park. Fungi play a vital role in the redwood ecosystem and have an important relationship with the health of the forest.