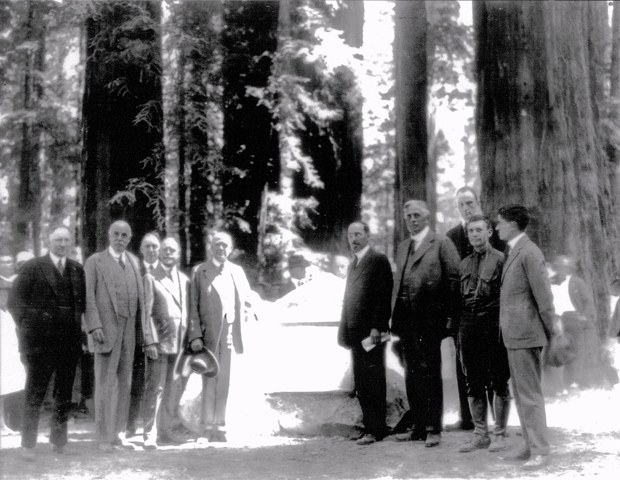 Humboldt Redwoods State Park, the third largest park in the State Park System and home to the famed Rockefeller Forest, exists today largely in part because three men from San Francisco set out on a road trip in 1917 to see the redwoods. When John C. Merriam, Madison Grant and Henry Fairfield Osborn witnessed the destruction of the magnificent redwoods, they were inspired to start the movement to save the remaining stands of virgin forest. Less than one year after their visit to the area now known as Humboldt Redwoods State Park (H.R.S.P.), these men founded Save the Redwoods League (S.R.L.). In 1921, only three years after the League's creation, Humboldt Redwoods State Park was put on the map.

On August 6th 1921, the Colonel Raynal C. Bolling Memorial Grove was dedicated and so began, as it was known then, Humboldt State Redwood Park. Though S.R.L. is given credit for the formation of the park, the redwood park idea actually started locally as the residents of Humboldt County were also becoming alarmed by the quick demise of the ancient trees. In 1907, Albert Etter, a prominent local horticulturalist, suggested to the then Secretary of the Eureka Chamber of Commerce, George Kellogg, that trees be set aside for a park some where near the town of Eureka. A redwood park committee was formed and included the locally well-known activist, Laura Mahan Perrott. Talk of the formation of a redwood park spread and the Humboldt County Federation of Women's Clubs became involved. In 1919 they formed the Humboldt County Women's Save the Redwoods League and joined forces with the national chapter in passing the Redwoods Preservation Bill (SB#80) in 1921. 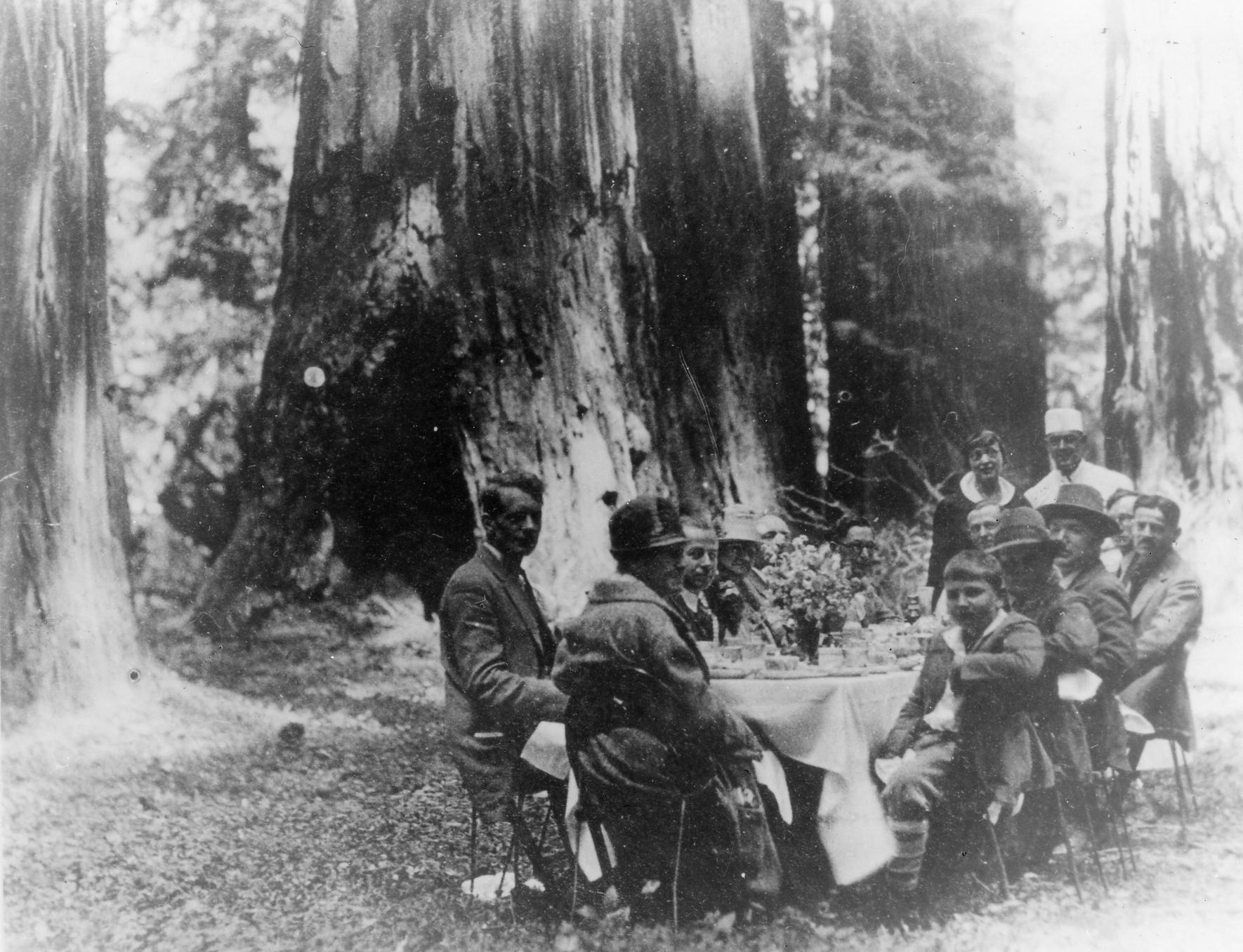 In the summer of 1926, a well-connected Newton B. Drury (secretary of Save the Redwoods League) invited the Rockefeller family up to the northern California redwoods and arranged for a lavish lunch to be had in the Dyerville Flats. John D. Rockefeller must have had an impressive meal because less than a year later he presented Save the Redwoods League with a check for $1,000,000 to purchase the grove. With matching funds from the State of California and another generous million dollar donation in 1929 by the Rockefellers, the 9,335 acres of Dyerville Flats was purchase from the Pacific Lumber Company in 1931. Initially, J.D. Rockefeller did not want the forest named after his family, so until 1951 it was known as the Bull Creek-Dyerville Forest. Today, it is known as the Rockefeller Forest and is the heart of Humboldt Redwoods State Park. Throughout the next few decades, H.R.S.P. grew and formal campgrounds were built. The first campground built by the state in 1922 was at William's Grove, named after the employee who built it. At one time, William's Grove was the park headquarters and had 100 campsites and 25 picnic sites. After the formation of the State Park System in 1928 and the acquisition of more property, the park headquarters moved to Dyerville. Also located at Dyerville was a California Conservation Corps camp. The men from that camp are responsible for building many structures in H.R.S.P. that still stand today.

During the Great Depression, new acquisitions slowed but the park staff continued to map out their plans for the future. After World War II there was a dramatic increase in park visitation, resulting in more acquisitions and a larger park staff. Unfortunately, the end of WWII also marked the beginning of a logging boom in Humboldt County like never seen before. Save the Redwoods League and California State Parks scrambled to acquire lands before the timber companies got a hold of them first. 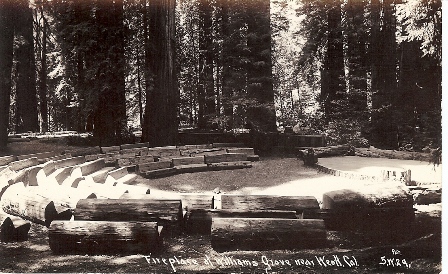 The catastrophic flood of 1955 temporarily brought logging to a halt, but only fueled the fire to acquire more lands in the now ravaged Bull Creek watershed. Then, only nine years later, another even more devastating floor tore through the region in 1964. Many local residents, who had resisted selling their property to the park after the 1955 flood, reconsidered and sold out. The park needed to acquire all of the lands in the Bull Creek watershed if the Rockefeller Forest was to be saved. By the 1970's Humboldt Redwoods State Park had expanded to approximately 25,000 acres, which included the damaged watershed. For many years Humboldt 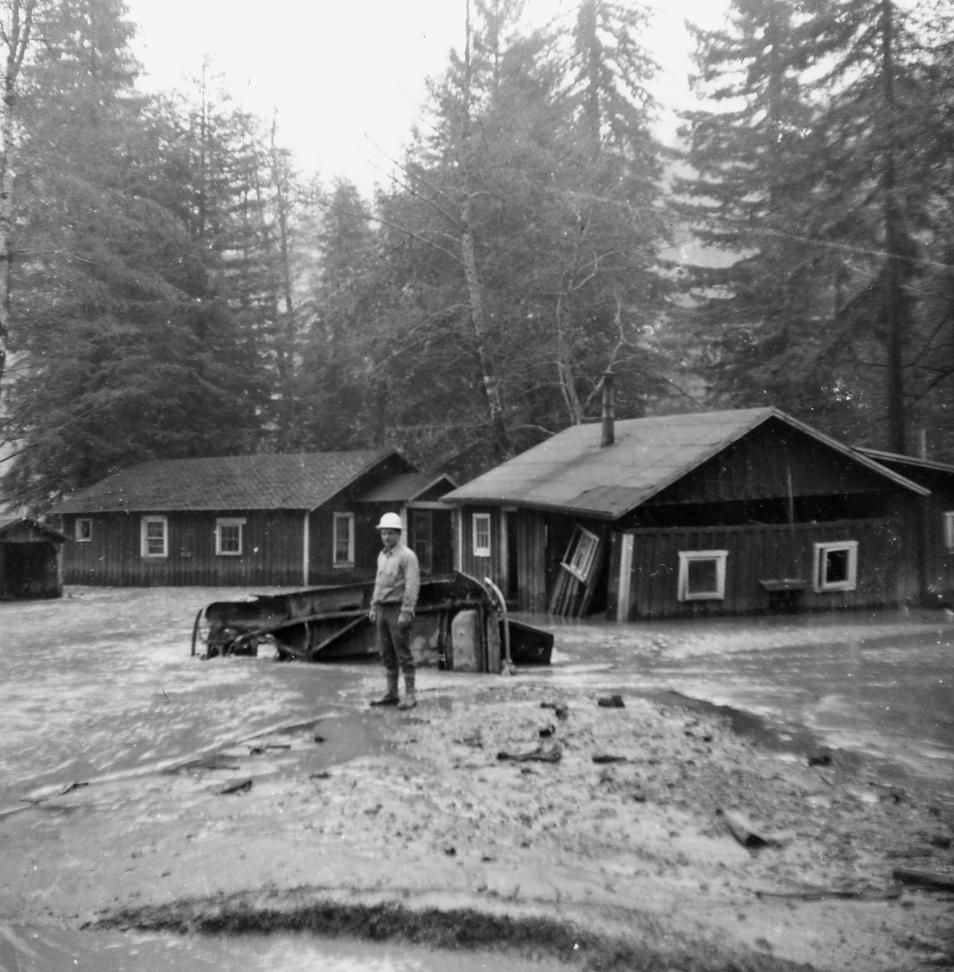 Redwoods State Park has worked to restore Bull Creek and its many tributaries. Rehabilitation projects in the Bull Creek watershed are on-going and many have been very successful. Visiting Rockefeller Forest today, it is hard to imagine the destruction that existed only sixty years ago.

Today, Humboldt Redwoods State Park and Save the Redwoods League continue to work together in their preservation efforts. Of the approximately 53,000 acres of park land protected within the boundaries of H.R.S.P., approximately 31,500 acres have been acquired as a direct result of work done and money raised by Save the Redwoods League. The park and S.R.L. are also working in conjunction to replant acquired lands that were previously logged. To date, the reforestation program has planted many thousands of trees and continues to raise seedlings for future projects both in H.R.S.P. and other state parks.

Humboldt Redwoods State Park attracts close to a million visitors each year and offers a wide variety of outdoor experiences. Some visitors stay in one of the four developed campgrounds, others choose to hike, bike or horseback ride on the more than 100 miles of trails, while others may stay for a picnic and a swim in the cool waters of the South Fork Eel River. Traveling along The Avenue of the Giants, many more visitors experience the grandeur of the redwoods from the comfort of their vehicles, similar to the first experience of the three conservationists from San Francisco back in 1917.

Whether walking among the giant redwoods or driving in a car, it's easy to understand what inspired the founders of Save the Redwoods League to have the wisdom and determination to fight for the preservation of Humboldt Redwoods State Park. Because of their efforts and the efforts of many other like-minded individuals, future generations will be able to enjoy, learn and continue to be inspired by the diversity and beauty of California's largest redwood state park.