Historically rich in character and color, Southern Humboldt County always has and always will harbor the pioneer spirit. Being one of the last great frontiers to be settled on the west coast, its past is not so distant. In the last 150 years, Humboldt County has seen the disappearance of its native population, the arrival of the Europeans, economic progress and decline on the back of the area's vast natural resources and the inevitable adjusting and restructuring of the county's residents as the protective redwood curtain grows thin.

Southern Humboldt County saw its first white men in early 1850 when the Josiah Gregg exploration party passed through, en route back to San Francisco. It was near the confluence of the Van Duzen and Eel Rivers that the party split up after a disagreement over the best route to follow back to the city. Half of the party choose to follow the coast and the other half choose to follow the Eel River. Though both routes proved to be difficult, seven of the eight men made it back. The leader of the party, Josiah Gregg, died of starvation and another party member was almost killed by a grizzly bear on the aptly named mountain, Bear Butte. Those that made it back told of an unexplored wild land, sparsely inhabited by Indians and richly endowed with ancient redwoods and other natural resources. It was only one year later that the U.S. Army sent Colonel Reddick McKee to Humboldt County to make treaties with the Indians, thus beginning the demise of the Native Americans and their way of life.

By 1865 most of the Indians had been removed, by whatever means necessary, and the first white settlers began to homestead in southern Humboldt. The early settlers made their living off the land in many ways. Everyone grew their own food and raised stock for meat. But in order to raise a garden and graze animals, you had to clear land so the homesteaders became loggers out of necessity.

Beginning as early as 1860, commercial logging had started in Humboldt County. In Southern Humboldt, it began with the tan-barkers and peelers who harvested the tannic acid from the bark of the tanoak tree for use in the leather tanning process. This was difficult work, but not as difficult as logging the redwoods. The thick, old growth redwood forests were a gold mine for the early timbers barons, but progress was slow. Using only an axe, it could take the loggers an entire week to fall just one tree. But with the completion of the railroad in 1914 and improvements in logging equipment, the ancient redwoods quickly began to disappear. Fortunately, by 1917 the Redwood Highway was nearing completion allowing for more people to travel into Humboldt County from out of the area. 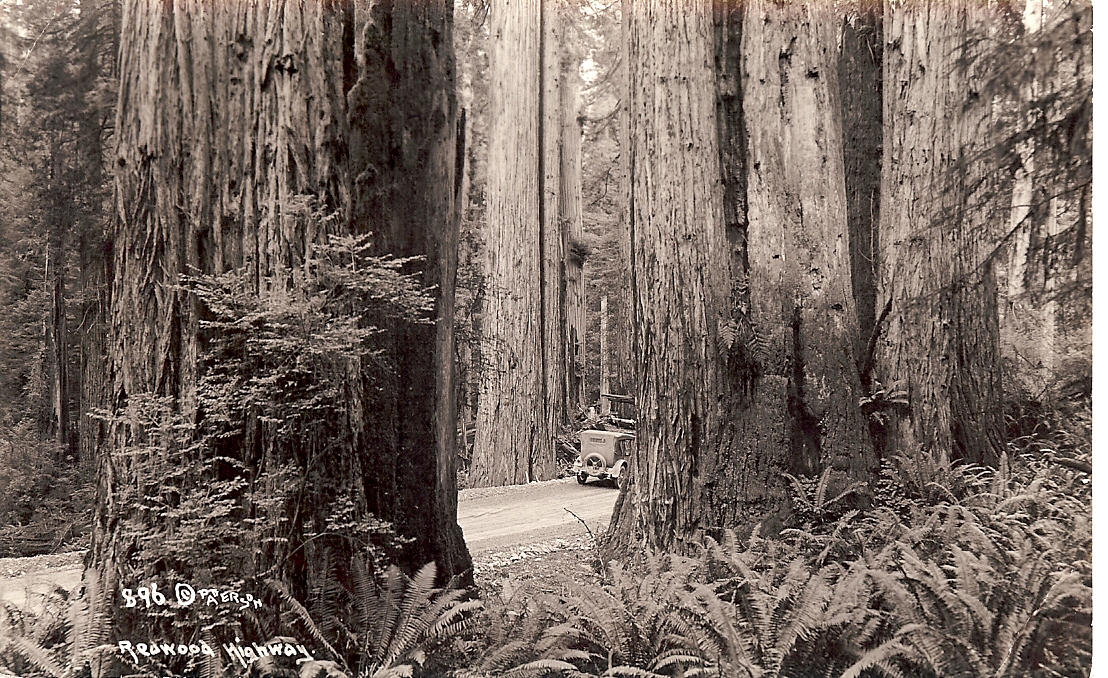 Three early travelers from San Francisco made it through the redwood curtain to find destruction and devastation all around them. These three men, Henry Fairfield Osborn, John C. Merriam and Madison Grant, inspired by what they saw, formed Save the Redwoods League in 1918 and began the movement to save the ancient redwoods from the loggers axe.

But not everyone made their living in the woods. Many southern Humboldt residents made their living off of growing produce which thrived in the warm climate and rich alluvial soils. The present day Garberville was once home to a famous orchard of prune trees. The area known as Fruitland Ridge was originally settled by Dutch immigrants who planted over 4,000 fruit trees and miles of vineyards. The award winning Albert Etter of Ettersberg became well-known for cultivating his delicious apples, but was also internationally recognized for his achievements in the culture of strawberries. Towns like Phillipsville and Fort Seward were also locally famous for their fruit production. 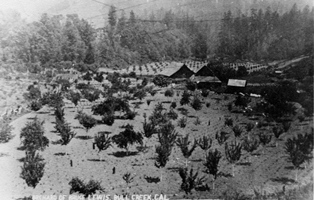 There were also early entrepreneurs who set up shop in Southern Humboldt, hoping to make their living by selling provisions to the hard working homesteaders. In the early 1870's Jacob Garber opened a mercantile in the town that would later bear his name, Garberville. He was also granted the rights to the post office and became the town's first post master on March 16, 1874. Mr. Garber made a decent living with his mercantile business, but later decided to move it north. He had discovered what many others had discovered-- the big money was to be made further north, closer to Humboldt Bay and the port towns of Eureka and Union Town (Arcata). In the early days, southern Humboldt County was generally thought of as a place you had to get through to get to Humboldt Bay, not a place to settle. Unless you were a logger, southern Humboldt was a difficult place to make a living.

But that would all change. As early as the 1920's, having heard of the giant redwoods and the campaign to save them, people made their way to southern Humboldt, despite the difficulty of reaching the area. Little did the early founders of the Save the Redwoods League know, but in their efforts to preserve the last of the old growth coast redwoods, they were also setting the stage for a second economic lease on life for the people of southern Humboldt County. Once the logging boom had settled to a dull rumble, tourism became the main source of income for many in the area.

Today, southern Humboldt is a destination point for thousands of travelers each year. Its warm summer temperatures, vast acres of public lands and endless recreational opportunities have become the mainstay of the economy. These characteristics are also what attracts the local residents, and each year more and more people choose to call the area home.

Though the rough and tumble early frontier days are a thing of the past, "So. Hum." will always be a welcoming refuge to the more adventurous type of person who seeks to live life a little on the edge, a little outside the norm and who takes comfort and pride in the rich and colorful history of the early pioneers who settled the area over 150 years ago.