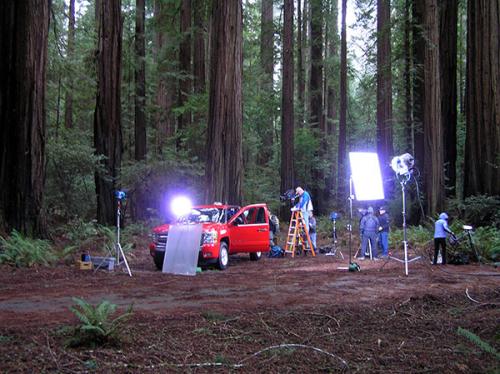 Humboldt Redwoods State Park offers spectacular scenery, making it a popular place to film still shoots, commercials, movies, and other videos. State Parks is an ideal setting for filming and still photography. A variety of filming locations are available throughout the park. A California State Parks Film Commission Permit is required. The California Film Commission (CFC) works in conjunction with Parks to permit these activities.

Parks charge reimbursement fees in order to accommodate filming and to offset personnel costs. These fees are collected and returned to Parks by the CFC. The CFC provides its services, the location and the permit at no cost.

To start the permitting process, the production company must call the State Park. The Park will then initiate a DPR245A and will have the company begin a permit on-line with the California Film Commission

The CFC’s website, has a State Permits tab that contains information about filming including insurance coverage, FAQ’s, basic Parks fees and the on-line filming permit system.

The application from the production company will then go to the CFC. The CFC refers them to the Park representative in charge of film permits and provides them a contact name, email address and phone number for this representative. Once the application is reviewed by the CFC, a copy is emailed to the Park. The application will be checked against the DPR245A. Parks then collects a signature on the DPR245A from the production company and provides a final copy to the CFC. Additionally, Parks determines which fees and reimbursements to charge and notifies the CFC with fee details.

The CFC finalizes the permit and creates an invoice based on the fees assigned by the Park. The CFC collects the fees and issues the final permit. A copy of both is forwarded to the Park and to the accounting office for Parks.

All Film permittees must also complete a COVID-19 plan for cast and crew, the required form will be provided with the DPR245A. Please note that even with a completed DPR245A, the CFC requires a minimum of 4 business days to process applications.